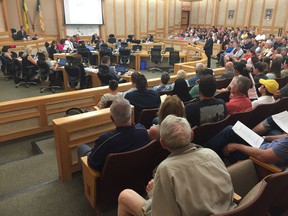 Saskatoon City Council is finally set to adopt new rules for the conduct of city councilors and the mayor.

The governance and priority committee of the council, which includes all city councils and the mayor, voted unanimously on Monday to adopt a new code of conduct.

The council has yet to approve the new rules, but that seems likely to happen at the full council meeting on Monday.

“It will be a long time,” said Coun. Bev Dubois, who chaired the meeting on Monday in the absence of Mayor Charlie Clark.

The changes stem from a February 2016 report by the city’s municipal review commission, which was appointed to advise the council independently on electoral rules, council compensation and conduct.

The Code sets out seven standards and values ​​that councilors must adhere to: honesty, objectivity, respect, transparency and accountability, confidentiality, responsibility and leadership, and the public interest.

The code provides for the creation of a part-time integrity officer to investigate complaints about suspected violations of the 36-page code.

The new rules require local politicians to declare gifts with a value of more than $ 100, which is well below the previous disclosure limit of $ 750.

The council members delayed the adoption of the new rules for months because of the wording of parts of the new statutes.

Ultimately, the city council decided to discard a controversial section that sought to prevent members from participating in party political activities in their “official capacity”.

Masks necessary on Saskatoon Transit, in metropolis amenities as of Sept. 1 – Saskatoon