Prime Minister Justin Trudeau visited Saskatoon Wednesday with an agenda that included a meeting with long-term care residents, agriculture students, vaccine researchers, and a visit to a daycare.

In a joint announcement with Everett Hindley — Saskatchewan’s minister of mental health and addictions, seniors and rural and remote health — Trudeau said that the federal government has agreed to give the Saskatchewan government $32 million to improve care for seniors living in long-term care.

The federal funding is being provided through the Safe Long-term Care Fund. Nine provinces, including Saskatchewan, are receiving funding.

“These investments are making a real difference for people and for caregivers,” Trudeau said.

The funding for long-term care homes is part of a $1-billion commitment the federal government made in the fall of 2020.

The Liberals promised $9 billion for long-term care during the last election, in addition to the $3 billion over five years that was already pledged in the 2021 budget.

“And now that we’ve come to an agreement on the $1 billion funding, which leads to $32 million here in Saskatchewan, we’re happy to talk about further funding from the federal government … to make sure that residents of long-term care homes right across the country are not just safe, but thriving,” said Trudeau.

Hindley said the last two years have been challenging as the pandemic has raged on. He said restrictions and feelings of isolation have been particularly difficult for seniors.

“We appreciate the federal government’s support today for the work Saskatchewan has done to improve infection prevention and control measures in long-term care over the past couple of years,” he said.

However, Hindley said the federal funding will be used to offset provincial costs already incurred throughout the pandemic.

“So whether it’s, you know, the cohorting of staff and facilities because of some of the measures, infection prevention and control. So that $32 million is going to be used in those sorts of areas. So it’s not anything really new in terms of where that money is going to be going.”

Next, Trudeau met with students at the University of Saskatchewan’s college of agriculture and bioresources. There he received a lesson on plant breeding and technological advances, including the use of drones. Trudeau also learned about innovative farming practices.

“I think one of the things that remains extremely important is that the federal government remains engaged with people in Saskatchewan,” Trudeau told reporters earlier in the day.

On Wednesday Prime Minister Justin Trudeau met with students at the University of Saskatchewan’s college of agriculture and bioresources. There he received a lesson on plant breeding and technological advances. (CBC News)

During the photo opportunity period of Trudeau’s visit with the students, the prime minister faced more cries from protesters who were critical of his leadership.

Then the prime minister visited the university’s Vaccine and Infectious Diseases Organization. VIDO has been at the forefront of Canada’s efforts to develop a COVID-19 vaccine. There Trudeau greeted the board and researchers who develop vaccines, thanking them.

“Everyone here, you and indeed the University of Saskatchewan, stepped up big time a couple of years ago when the pandemic hit and everyone needed to spring into action,” Trudeau said.

“And one of the reasons you were able to move so quickly and lead so well during this challenge is you’ve been working on this for a long time and all of you have been demonstrating the kind of dedication and excellence that showcases the very best of Saskatchewan, the very best of Canada, not just across the country, but around the world.” 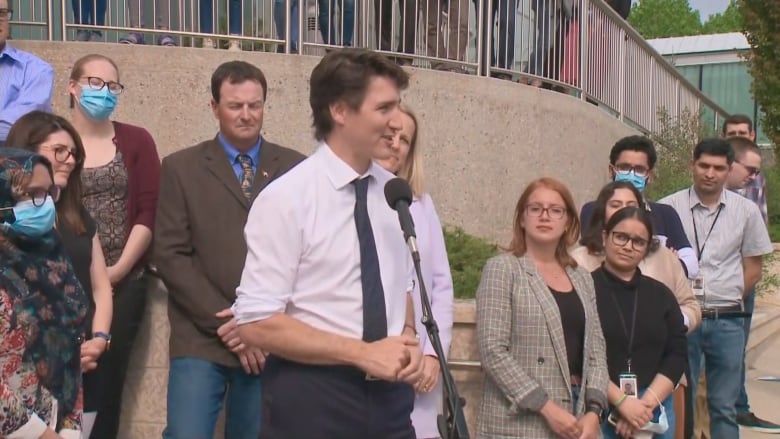 During his visit to the University of Saskatchewan on Wednesday, Trudeau addressed approximately 100 VIDO employees on the steps leading up to the building. (CBC News)

Trudeau’s fourth and final stop was at the Queen Elizabeth School Childcare Centre, run by the Saskatoon Open Door Society. There, he met with families to discuss early learning and childcare.

Last year, Ottawa signed a deal with the Government of Saskatchewan to reduce how much parents pay for childcare. The goal is to achieve $10-a-day licensed childcare in the next three to four years. 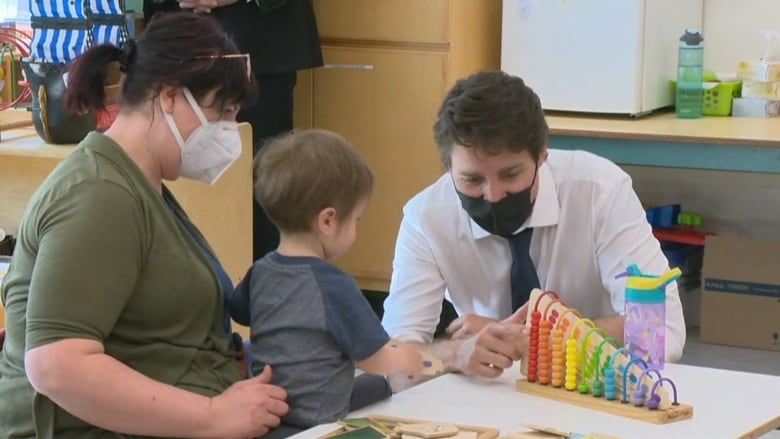 ‘That was a troublesome present’: Avenue performer escapes tough scenario…