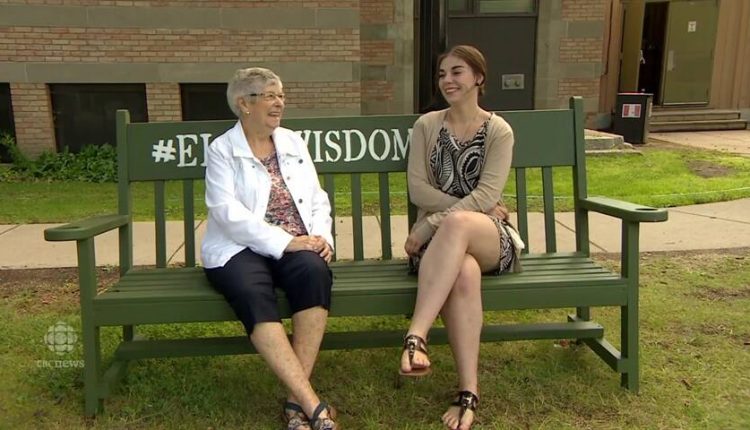 Seniors at Saskatoon Fringe invite younger to sit down a spell

Saskatoon’s Fringe is a festival of youth in many ways.

“If we’re lucky enough to live until we’re pretty old, then we should enjoy every day.”– Muriel Baxter

What does 82 year old Muriel Baxter think of all these young people?

“I suppose what makes me roll my eyes the most is the fact that they rarely look up from their phones and it’s difficult to communicate with people when you don’t make eye contact,” said Baxter.

Baxter is part of the senior guard on duty at this youth celebration. You have taken up your post on a green park bench just off Broadway Avenue. An invitation to intergenerational dialogue in the language of youth is emblazoned on the backrest: #ELDERWISDOMYXE.

Usually a buddy bank is a place where kids can sit when they’re looking for a friend during their break … but this one is supposed to build friendships between young and old. 1:48

“The idea is to give seniors the opportunity to sit down, have a place to sit where they are comfortable and share their stories and knowledge,” said Brittany Yaganiski.

Yaganiski is with Saskatoon Services for Seniors, the organization behind this effort. She said the program here is inspired by the work being done on the homes of senior citizens in Ontario.

“We take it out of the nursing home setting and bring it to a place where younger people in particular come.”

CBC Radio’s Saskatoon Morning host Leisha Grebinski had the chance to park on this bench and soak up some of the wisdom Baxter had to offer.

Grebinski’s questions were broad and covered a range of topics, including fear of getting older.

“It will happen,” replied Baxter. “We can’t stop it … and if we’re lucky enough to live into old age, we should enjoy every day and use our days.”

Baxter also spoke about life’s challenges, saying hardships are coming and that, in retrospect, they won’t seem so bad.

She also offered a retrospective look at parenting and suggested that one must always work on maintaining good communication with children.

“Start with a basic trust, don’t think they will cross the line.”

The park bench and #ELDERWISDOMYXE is not a limited engagement in Saskatoon. When the Fringe Festival closes for another year, the work will continue.

“My hope is that at some point we will have a couple of benches in the community that are in different places and people just sit down and talk to older people,” said Yaganiski.