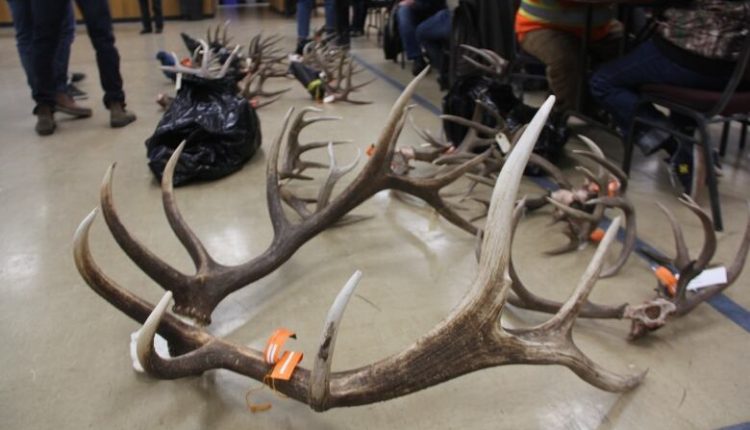 Hunters from across the province had a chance to get their game measured and scored at the Saskatoon Wildlife Federation this weekend and officials say while 2019 wasn’t a record-breaking year, it was a “solid” one for hunters.

On Sunday, numerous racks of antlers could be seen spread throughout the federation’s busy clubhouse, with a group of veteran hunters — known as scorers — painstakingly measuring and examining the bone structures.

While the event helps offer a sense of how the season went, Holmquist said it’s also a chance for the city’s hunting community to gather and regroup after the end of a season.

“It’s very important for anyone that comes in. It’s not just getting their racks or their mounts scored, they’re getting to visit with all of the other hunters, because hunting can be pretty solitary,” he said.

“You’re out there by yourself, and the fewer people around the better, but it leads to some pretty great stories and we’ve heard a lot of them here today.”

Racks from various animals can be seen on the floor of the Saskatoon Wildlife Federation clubhouse on Dec. 8, 2019. Hunters from across the city gathered at the clubhouse for a chance to get their game scored and potentially entered into the record book. (Morgan Modjeski/CBC)

The racks with the highest score will then be entered into the Saskatchewan Henry Kelsey Big Game Records, which is the official record keeping system for the province.

While the 2019 season wasn’t a record breaker, the hunting in Saskatchewan keeps people coming back for more.

People like Mike Frawley, who currently resides in Lake Placid, Florida, but travels to Saskatchewan every season to hunt deer. He said the hunting in Saskatchewan is unmatched. 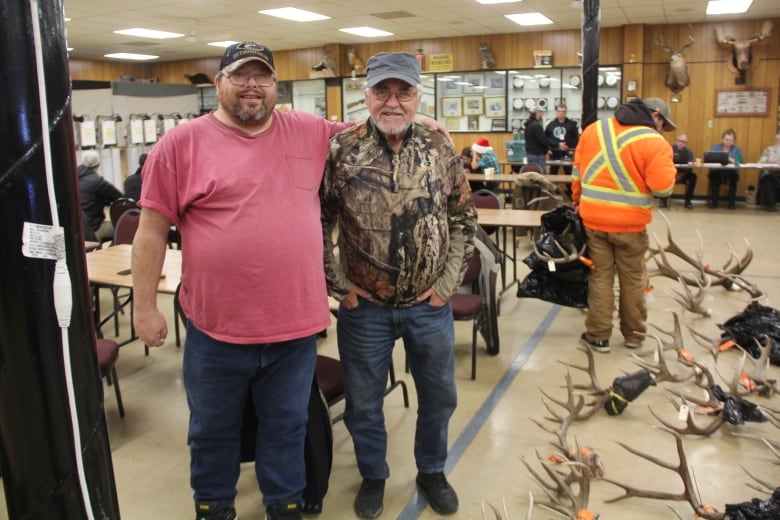 Kirk Taylor, left, and Mike Frawley pose for a photo at the Saskatoon Wildlife Federation on Dec. 8, 2019. Frawley said he regularly travels to Saskatchewan from Florida to hunt and says it’s both the game and the people that keep him coming back. (Morgan Modjeski/CBC)

“You guys have got a resource here that nobody else has anywhere in the world,” said Frawley, who called himself a “white-tail fanatic.”

However, he said it’s not the game alone that keeps him coming back, as he said the hunting community in Saskatchewan is tight-knit and one where the future generation of hunters are embraced.

“I never saw any place like it where they score deer, and the kids know how to score them, and this is their life,” he said. “It’s beautiful. They’re not out stealing hubcaps, they’re involved in nature.” 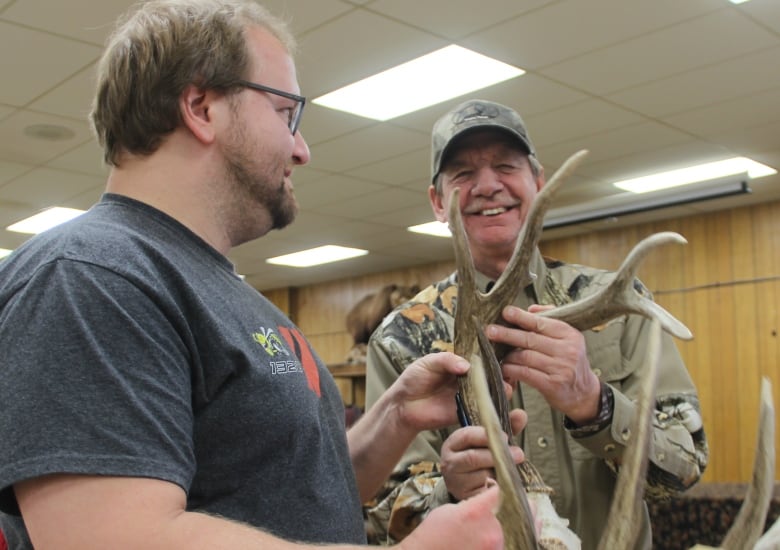 Bentley Coben, a well-known scorer in Saskatchewan, holds the rack of a hunter while he was in Saskatoon on Dec. 8, 2019 for “Scoring Day” at the Saskatoon Wildlife Federation. The event saw hunters from across the city converge on the federation’s club house for their chance at the record books. (Morgan Modjeski/CBC)

Bentley Coben, a well-known scorer in Saskatchewan, was present at the wildlife federation on Sunday. He’s scored mounts and racks from across the province and said there was a solid showing of racks in Saskatoon.

As he spoke, he held the rack of a white-tailed deer that scored a solid 171 ⅛ in the Boone and Crockett Club’s scoring system, which is the official system used across North America. He said this fine of a rack, shot by Lorie Lubyk, is anything but common.

“This is going to make the record book right here and we don’t get to see too many of these, but this is a real prime example,” he said.

For Lubyk himself, he said scoring day continues to be important.

“Not only is there a little bit of quiet competition, but it’s a tradition,” he said. Adding: “I’ve been doing it for more years than I care to count.”