Larry Klopoushak (left) is the artistic director and conductor of the Lastikwa choir. (Lara Fominoff/650 CKOM)

The Saskatoon home of Donni and David Hartshorn was packed with friends and relatives Saturday night, patiently anticipating a special evening musical performance.

It was a time to not only celebrate Ukrainian New Year (Jan. 14) by the Julian Calendar, but also the first time the Lastikwa Ukrainian choir and band had been out carolling in the last three years. This year, the choir is also celebrating its 40th anniversary.

At 6 pm, the choir members who’d been gathering outside paraded boisterously into the home, with accordion, string bass, trombone and wooden whistles playing, and the choir singing its greeting song. Artistic director and conductor Larry Klopoushak said their carolling is rooted in centuries of tradition. 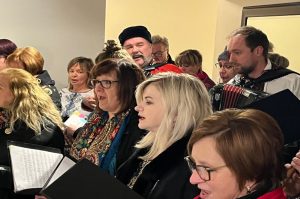 “It started in Pagan times of course, just wishing people health and prosperity in the New Year, as we all do now. Then once Christian times came along, carols were added celebrating the birth of God, of Jesus, and so the tradition grew in that way,” he explained.

Some of the non-religious traditions were also kept, like scattering wheat kernels on the ground to “sow the wheat,” to wish bounty, health and prosperity for the family in the coming year.

Klopoushak said about half a dozen of their 20 or so members are also Ukrainian newcomers. Tetiana Morozova, who came to Canada several years ago, just joined the choir.

“I’ve been here for several months. i love it I think my love will never be the same since I joined the choir,” she said.

Thank you to the Lastikwa Ukrainian Choir & Orchestra, and to Donni & David Hartshorn for letting me tag along for some great music & interviews for Ukrainian New Year! #yxe #SlavaUkraini #celebration pic.twitter.com/fiSTcK9fCT

Maria, one of the veterans of the choir, said she was inspired by Saskatoon’s Ukrainian culture and sense of community.

“When I joined for the first time, I was impressed how the Saskatoon Ukrainian culture passed on traditions from generation to generation,” she said. “I especially love carolling season.”

Donni Hartshorn said inviting the choir to her home had been a tradition for many years until COVID-19 hit.

“I really liked having everyone in my home,” she said. “(So) we invited lots of family and friends to share with us today. This is a choir I used to belong to myself, and my daughter used to sing in as well. So we’re very well-connected.”

Klopoushak said he hopes the traditions and the carolling continue for many years to come. The choir will perform at homes by request until the end of January. Throughout the rest of the year, the choir performs at a variety of events in not only in Saskatoon but across Canada as well.