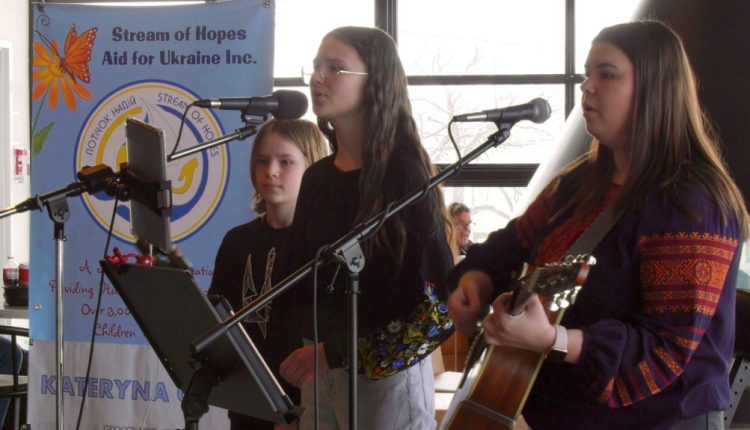 Kateryna Tokarska is helping Ukraine the only way she knows how, by using her voice.

The young singer has been entertaining crowds in Saskatoon this week with her older sister Natalia and younger brother Marko.

Each performance is not only meant to spread awareness and keep Russia’s invasion in Ukraine top of mind for people, it’s also meant to raise funds for displaced Ukrainians seeking refuge, shelter and food.

“You feel that you can’t help in any way, except for what you can do. We try to do our best. It feels really good when people come up to you and tell you that you’re helping in some sort of way. It kind of reassures you that everything will be ok,” Kateryna said.

The trio was stationed at Midtown Common, entertaining the downtown mall’s food court. The moment the Tokarskas began playing and singing, they caught the attention of the crowd.

Slowly, donations started to pour in like they did on Friday when the group raised more than $1,200 in a little over three hours.

“A lot of people have been very supportive. So it’s nice to see that the whole world is coming together to support Ukraine,” Nataliya said.

A few days after the Russian invasion, Nataliya and Kateryna combined to write a song about the conflict.

“That is another huge way to raise awareness. Not just by speaking up about it, but by using your art and using your platform to provide information to the world of what is going on and how they can support,” Nataliya said.

Kateryna wrote most of the song which remains untitled for now.

After watching her family’s homeland under constant attack from Russian forces, finding the words for the song was a natural process.

“Ukraine is fighting so that this monster doesn’t rob their identities and doesn’t take away their land,” she said of the song’s meaning. “I’m pretty sure that Ukraine will keep on fighting, and we will fight for peace.”

TCU Place was also inspired to contribute to the humanitarian aid after seeing plenty of other businesses and organizations raise thousands of dollars in a matter of hours.

Using the convention center’s kitchen, TCU was able to raise nearly $15,000 after selling 1,000 take home dinners consisting of the typical Ukrainian fixings: perogies, borscht, cabbage rolls and sausage among others.

All proceeds are going to the Canada-Ukraine Foundation, formed by the Ukrainian Canadian Congress to coordinate, develop, organize and deliver assistance projects generated by Canadians.

Tammy Sweeney knew Saskatchewan’s Ukrainian heritage was strong and apparent, but the outpouring of support was exactly what she expected from the city, the province and the entire country.

“It just really reinforces how caring and committed the people of Saskatchewan and Saskatoon are. Everybody’s rallied around this and it’s really great to see, especially coming out of COVID and some of the divisions that have happened in our country over the last couple of months,” she said.

Hundreds of vehicles will line up and pick-up takeout orders Saturday, where Sweeney says a team of volunteers are happy to greet them and thank them for their support.

As the war continues, so does the support from people near and far hoping to help in any small way they can.