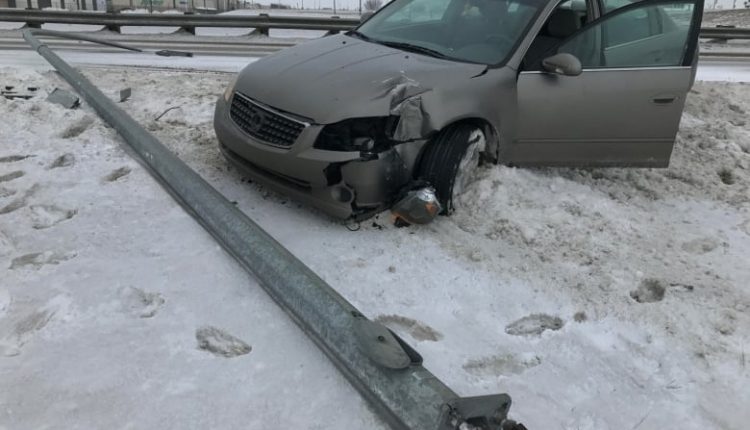 A Saskatoon man has been hospitalized with life-threatening injuries after his car crashed into a tree Wednesday morning.

The man was the only person in the car.

Motorists are asked to avoid the area during the police investigation.

This car went off the road and hit a light pole on Circle Drive. (Matthew Garand / CBC News)

Half an hour later, a Saskatoon Transit bus hit a guardrail near the North Circle Drive Bridge. Three passengers were rushed to hospital with minor injuries. The bus driver was given a ticket for driving without care and attention.

Also, another car came off the road and hit a traffic light as it exited Circle Drive onto Preston Avenue. The light pole blocked the traffic.

The Saskatoon Police have issued a warning to warn drivers on the streets in and around the city.

Snow creates slippery conditions and poor visibility. Drivers are asked to reduce their speed and leave more space between them and the vehicle in front.

The driver is said not to have been injured, but the light barrier hinders the traffic. The town courtyards have been notified, but motorists are asked to consider an alternative route.