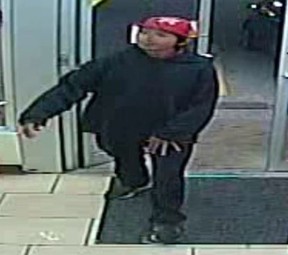 A 23-year-old man was identified as a suspect in a supermarket robbery and the clerk was seriously injured.

An arrest warrant has been issued against Anthony Alvin Brandon (Peeteetuce), who, according to police, will be charged on Friday with robbery, aggravated assault and breach of an obligation following the early morning incident. He is described as 5 feet 8 and 150 pounds, with brown hair and brown eyes.

Officials were called to 7-11 on the 200 block of Pendygrasse Road at around 2:30 a.m. on July 16 and found a 20-year-old employee with serious injuries, Saskatoon police said in a press release.

A surveillance image of a suspect in a July 16, 2019 robbery that seriously injured a shop clerk. Photo courtesy of the Saskatoon Police Service

The suspect wore a red Chicago Bulls hat and a black hoodie with red writing on the back and left sleeve. According to police, he was wearing a black balaclava at the time of the attack.