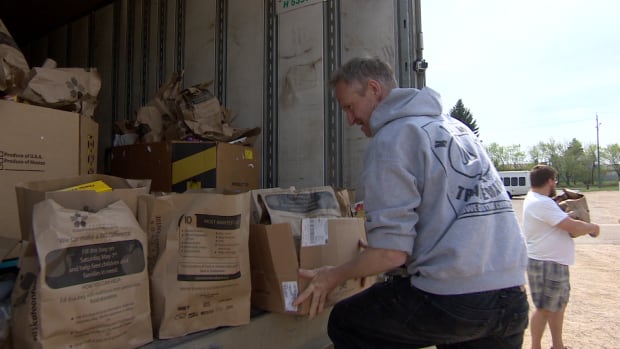 The Saskatoon Food Bank and Learning Center (SFBLC) is hoping their annual City Wide Food Drive event will raise more than 100,000 pounds of food this year. That’s around 45,000 kilograms.

This year’s goal is high, but necessary, said SFBLC managing director Laurie O’Connor. So far in 2016 in Saskatoon, more than 20,000 people rely on the blackboard every month. This includes 10,000 children.

That is an increase of more than 3,000 people who use the service compared to the previous year.

“The economic downturn, rising food prices and – of course – rent, transport [and] Childcare. These things put a strain on people’s budgets, “O’Connor said.

O’Connor said the board handed out 75,000 empty bags for the grocery drive. She said she hopes “each and every one of them will come back full” to meet growing demand.

“It is overwhelming for us to see how many people are fighting,” she said. “We always hope that something will change in the economy.”

Saskatoon Mayor Don Atchison said the growing demand for food bank aid could be partly attributed to a collapsing economy in western Canada.

People originally from Saskatchewan may not have job opportunities in Alberta or elsewhere and return home in search of work.

“When you hear these things and you have no job, really rely on the board to help you,” Atchison said.

Even if the SFBLC hits its target during the 11th annual grocery campaign, O’Connor said it could still be difficult to meet the growing demand.

“That might or might not keep us going through the summer,” she said. “That depends on how many people use our services.”

Saskatoon meals truck will get big props from Ludacris