The Saskatoon Food Bank and Learning Center received 300 pounds of meat from the Saskatchewan Wildlife Federation just in time for the holiday season. (Mia Holowaychuk/650 CKOM)

What would you do with more than 300 pounds of meat?

The Saskatoon Food Bank and Learning Center was thrilled to receive that much Tuesday in a generous donation of elk, deer and moose meat from the Saskatoon Wildlife Federation as part of its Hunt 4 Hunger program.

The program allows hunters to donate any extra meat during the hunting season; the meat is then processed and distributed.

The Saskatoon Wildlife Federation donated 300 pounds of meat to the food bank this morning pic.twitter.com/iVxHmkncNs

Todd Holmquist, the executive director of the Saskatoon Wildlife Federation, said the program was created by its members to provide food for those who need it in the community.

He said since the program’s creation in 2010, the organization has donated just over 13,000 pounds of meat to the food bank.

This year the Saskatchewan Ministry of Corrections, Policing and Public Safety partnered with the Saskatoon Wildlife Federation to help supply and process the meat. 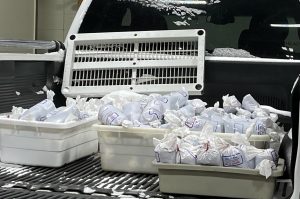 The Saskatoon Food Bank and Learning Center received 300 pounds of meat from the Saskatchewan Wildlife Federation just in time for the holiday season. (Mia Holowaychuk/650 CKOM)

Conservation officer Sgt. Chris Maier said it’s important to be able to give back to the community through the program. He added all of the meat is sampled to ensure it’s safe to eat.

Deborah Hamp, the director of operations and engagement at the food bank, said the donation will be used to stock up inventory, and will be well-received by the community. Families will receive about two pounds of meat per hamper.

The need for food this holiday season remains high.

“We’ve seen inflation have a major impact on the community that we serve,” she said, noting the organization sees about 20,000 people a month.

Hamp said the organization has been fortunate to receive support from the Saskatoon community. It’s managing to keep up, but due to the increase in inflation and the high demand for food, Hamp said officials are concerned when looking into the early months of next year.

“Just because Christmas is going to be over doesn’t mean the meat is done,” he said, adding more will be delivered in January.