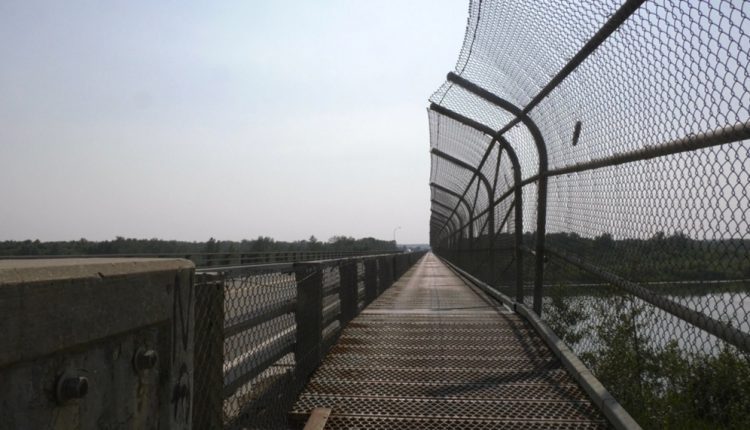 After a racist sign was placed on a bridge on Muskoday First Nation, the Saskatoon Tribal Council (STC) is hoping for more frank discussions to address harmful stereotypes and speak more about the truth.

The sign was found on a bridge on the Muskoday First Nation. The incident is under investigation by RCMP.

Arcand said he believes the timing of the sign is no coincidence given the recent discoveries of unmarked graves at former residential schools.

“I feel like we’re being targeted as Indigenous people. This happened on the lands of the Muskoday First Nation, and that’s pretty serious. They are driving through our communities, coming to our communities and making these statements,” Arcand said.

“The question is why? What is that going to do for people? How is that going to help reconciliation? It’s not, it’s a divide and conquer tool. I’m not here to give that gentleman anybody or else any power thinking they are doing something right because they are wrong”

Arcand said he knows most people from Saskatchewan don’t hold these beliefs, but he would like to see more people taking a stand against racist acts like this.

“I guarantee you in the city of saskatoon and probably every other city in the province, there’s more people that are going to stand with Indigenous people to do the right thing than there is people making those type of racist comments and bad decisions,”

Arcand said communication is key when it comes to educating people about misconceptions and stereotypes, and he would be willing to sit down with whoever posted the sign to have a conversation.

“We ask that individual, other individuals to come forward and sit down. Let’s have a coffee, let’s have a tea and talk about how we can work together and make it better for everyone.”

Arcand said he finds several problems with what was posted on the sign which said “white lives matter” and falsely claimed Indigenous people don’t pay taxes.

“If you did the fact-finding you would see that non-indigenous people don’t pay all the taxes, you know? That’s the truth, right? How can someone make a statement like that when Indigenous people pay their taxes,” Chief Arcand said.

“I know many people that pay city taxes, buy their own homes, they are part of the economy, many, many people. That’s what we’re trying to teach our young people to do, to break that cycle in that system.”

Education is a big step towards reconciliation according to Arcand, reaching people with the truth so incorrect stereotypes can be seen for what they are.

“It’s not a one and done deal, it has to be a continuation of moving forward. If you say ‘How do we change this?’ it’s education. We’ve got to put this stuff inside the schools, so the kids can change the parent’s minds,” Chief Arcand said.

The STC is hosting a walk on Tuesday for reconciliation and residential school survivors starting at 1 pm at Midtown Plaza.

The STC is asking people to bring signs, wear orange, be ready to walk and be ready to work together towards reconciliation.

Rhonda Rosenberg, executive director of the Multicultural Council of Saskatchewan, said she is aware of the sign and believes there is a level of ignorance behind this kind of racism.

“There’s no question that it is embedded in racism, and a kind of racism that is really about ignoring not just the responsibilities under treaty, but also the benefits to people who are non-indigenous to this land under treaty,” Rosenberg said.

“The idea ‘I pay taxes so that you don’t have do anything’ is really ignoring the wealth we’ve been able to generate for those of us who are non-Indigenous. That wealth has come at the expense of Indigenous people, but also from this land that we live on.”

Rosenberg agrees that education is a big step needed to be taken to help bring an end to statements as harmful as this.

“The sign that we saw in Muskoday is embedded in actually not understanding the truth of history. The person who put it up probably learned history the way I did in school, which was not the whole truth, and was really warped in terms of the perspective,”

“We all have to do some unlearning of what we might have learned in school if we grew up here, and actually learn the truth.”

Talking with those around you about truth and reconciliation is one step Rosenberg said the average person can take to work against harmful stereotypes.

“It’s really important for people to share what they are learning, and to act within their circles. Acting within our circles of influence. Whether it’s our family, which can be the hardest. Our friends, our colleagues,” Rosenberg said.