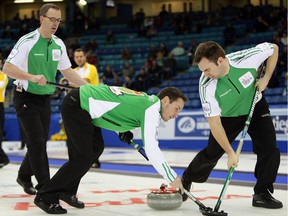 For Canada’s top curlers, the road to the 2022 Olympic Winter Games in Beijing could lead through Saskatoon.

Saskatoon won the silver medal last time, but the curling community and the city’s fans are hoping for the gold this time.

After Curl Saskatoon finished second behind Ottawa to host the 2017 Olympic Curling Tests, Curl Saskatoon hopes the city will host the best men’s and women’s curlers in Canada in 2021.

Curl Saskatoon has applied to host the Tim Hortons Roar of the Rings tournament in December 2021 to determine who will represent Canada in the Olympics.

“We believe it is now one of the premier curling events in Canada,” said Curl Saskatoon’s former president Mark Southam in an interview on Thursday. “We believe it will bring a lot of people to the city and be a good showcase for the city.”

Curl Saskatoon has requested US $ 350,000 from the City of Saskatoon to pay Curl Canada’s US $ 1 million host fee for the Olympic Trials. The organization has also asked the province for $ 750,000, according to a report on the agenda for Tuesday’s Committee on Planning, Development and Community Services meeting.

The event, which would be held at the SaskTel Center, is reported to attract 150,000 spectators and have an economic impact of $ 16 million.

Heather Bury, the sports director of sales at Tourism Saskatoon, said Thursday she expects Curling Canada to make a decision on the successful host in September. A formal announcement is expected by the end of the year, Bury said.

Curling Canada officials were unavailable for further information on the application process.

“It’s nice to have something like this in December and it’s just before the Christmas break,” added Bury in an interview.

“There are a lot of curling fans here (in Saskatchewan),” said Bury. “From the perception of the fans, this will be a big one.”

Bury speculated that there might be competing offers from markets like Edmonton, which has a new downtown arena, despite the fact that the Alberta capital hosted the trials back in 2009.

The trials for this year’s Pyeongchang Winter Olympics, South Korea, took place in 2017 in Kanata, Ontario, outside of Ottawa.

Cities with fewer residents than Saskatoon have hosted Canada’s Olympic curling trials, including Brandon in 1997 and Regina in 2001.

The City Hall Administration recommends the Planning, Development, and Community Service Committee approve the application for $ 350,000.