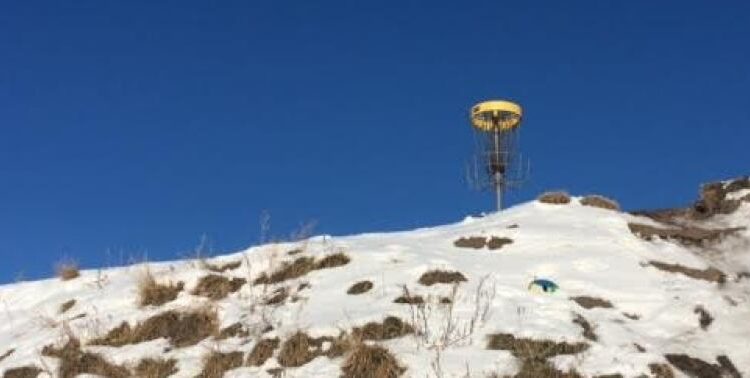 Saskatoon’s golfing greens might have turned white since the arrival of winter but one city sporting group knows you don’t need grass to play golf.

With a motto of “no wimps, no whiners,” Saskatoon golfers will converge on Diefenbaker Park on Sunday to compete in the annual Gophertown Disc Golf Ice Bowl tournament.

Disc golf is played like traditional ball golf, but with flying discs instead of balls and clubs. One stroke is counted every time the disc is thrown, and the player with the fewest strokes overall wins.

Greg Rokosh, director of the tournament, said beginners are welcome, adding that it was an addictive sport and a year-round alternative to traditional golf.

Disc golf is played like traditional ball golf, but with flying discs which are thrown into baskets, such as the one pictured above. Disc golf also does not require the use of clubs or golf balls. (Submitted by Greg Rokosh)

“A lot of people who pick up the sport find, like myself, they can’t put it down,” said Rokosh.

Today’s tournament is a fundraiser for the Saskatoon Food Bank and Learning Centre. Rokosh hopes the tournament will raise $500 and 68 kilograms of non-perishable food for the food bank.

A shotgun start to the match is scheduled to begin at 12:30 pm CST.

Rokosh hoped to see a big crowd at the event, adding that the sport is accessible to all ages.

“I’ve seen people out there with their three-year-olds and walking alongside the 93-year-olds and everybody seems to be picking up the sport and able to participate at their own level,” he said.