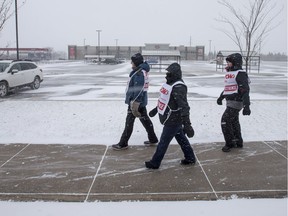 The cooperative says offensive messages have been scrawled into their headquarters and nails scattered in the parking lot.

It is unclear who was responsible for the graffiti or the nails and the matter has been referred to city police for investigation, said Grant Wicks, executive director of the Saskatoon Coop.

“I cannot attribute (it) to any particular cause. I can tell you that in the six years we’ve been here, there have really been no cases of vandalism, ”Wicks said in an interview on Tuesday.

Saskatoon Police Spokeswoman Julie Clark confirmed that graffiti had been reported but said there was “nothing about nails”. Wicks said in a subsequent email that the incident would be reported soon.

The union chief of around 900 workers on strike said he had not heard of the reports of vandalism in the cooperative’s offices until a reporter asked him about it.

“This is certainly not the behavior we would expect from our members,” said Norm Neault, president of Local 1400 of United Food and Commercial Workers (UFCW), on Tuesday afternoon.

“We will not tolerate that one iota,” said Neault, adding that the incidents had “nothing” to do with the union.

Saskatoon Co-op employees, who have been working without a collective bargaining agreement since November 2016, picketed the picket line for the first time in 35 years on Thursday after 65 percent of them turned down management’s last offer.

The dispute hangs on a proposal that would cut the maximum potential income for new hires by as much as $ 4.36 an hour.

While the Saskatoon Co-op insists that the second wage structure is necessary to keep the organization financially viable, the union pointed out that the cooperative was profitable and argued that it was unfair to cut wages for new employees .

The strike took an unusual turn over the weekend when Craig Thebaud, a former Saskatoon Coop employee and former UFCW Local 1400 staff representative, launched a petition to change the cooperative’s negotiating position.

Should 300 Saskatoon Co-op members sign the petition, it can be used to force a special meeting at which members can vote to remove the cooperative’s board of directors and create a new board.

Grant Whitmore, chairman of the board of directors of the Saskatoon Co-op, referred to Wicks, who denounced the petition as an example of “bad faith” negotiation and an attempt to circumvent collective bargaining.

Thebaud rejected this criticism and defended his actions as a member of the Saskatoon Co-op, which operates within the statutes.

UFCW Local 1400 shared the petition on their social media page earlier this week. On Tuesday, Neault defended it as “completely separate” from negotiations between the union and the cooperative’s management.

“If the Saskatoon Co-op members are not happy and want answers, there is a meeting (as an option),” he said.

Management and union officials met on Friday but were unable to reach an agreement. Their next meeting is scheduled for November 29th. Both Wicks and Neault said Tuesday they would be happy to meet earlier should the other side so wish.

The strike affects more than 20 Saskatoon Co-op grocery stores, gas stations and hardware stores in Saskatoon, Martensville and Warman, some of which are being kept open by managers and employees who have chosen to picket pickets.

The grocery store and the gas station in the Center Mall are not affected by the strike, as their employees are represented by a different union.

Postmedia advocates a lively but civil discussion forum and encourages all readers to share their thoughts on our articles. It can take up to an hour for comments to be moderated before they appear on the site. We ask that you keep your comments relevant and respectful. We have turned on email notifications. You will now receive an email when you’ve received a reply to your comment, there’s an update on a comment thread you’re following, or when a user follows a comment. Check out our Community Guidelines for more information and details on how to customize your email settings.