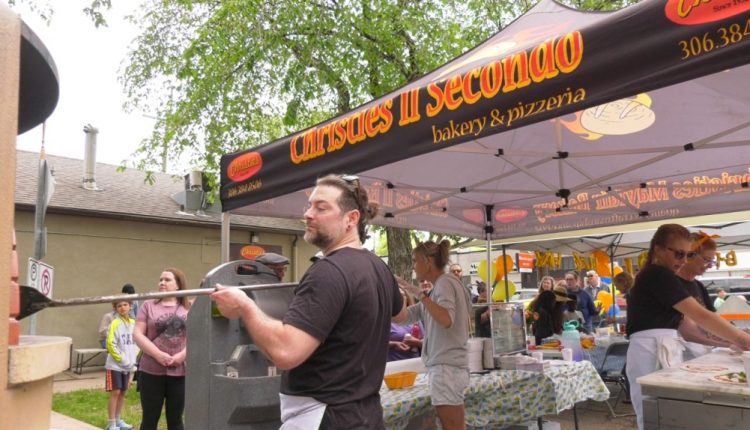 When Ennio Muzzolini walked into Christie’s Mayfair Bakery in 1965 interested in purchasing the small bakery on 33rd Street, he never imagined he’d one day be looking on as hundreds of people lined the block to get their hands on a baguette, cinnamon bun or wood -fired pizza.

Back then he was just trying to keep the business afloat.

“How can I explain it?” he said at the bakery’s 90th anniversary celebrations Saturday.

“We had no money, we didn’t know anything. I knew that I could work, but in the very beginning we had some hard times. We survived. We made it and we appreciate what the people have done for us.”

Saturday marked the company’s street party, where entertainment, pizza and plenty of other baked goods delighted the many dozens of customers.

Muzzolini bought the bakery from the Christies brothers, who originally opened the bakery in 1932.

“Unbelievable. After all these years I don’t believe it. What else can I say?” he said, looking at all the people who came to celebrate. “It’s awesome.”

Ninety years later, the family business now run by Tracy and Blair Muzzolini, Ennio’s children, rung in the milestone with a street party fit for a Saskatoon staple that has grown to mean so much to many in the area.

“Our family, our friends, our staff, we’re hard working people. We work together to solve problems, we preserve and we overcome – and that’s why we’re here today,” Tracy said.

With endless stories of multi-decade and even multi-generation customers, the family never gets tired of hearing about customers that met at Christies during a first date or people who only trust the Muzzolini’s with all the baking for every special occasion.

More than anything, the Muzzolini’s love going to work every day.

“Making bread, making pastries, making pizza is one of my favorite things, and the people that come together to work for us and work with us share the same passion for good food,” Tracey said.

While it may be easy to look ahead to the next 90 years, Tracey knows the same approach is required that Christie’s got to its 90th year anniversary if it hopes to stand the test of time.

“Just think of every hurdle as just another problem to solve because that’s really what it adds up to is just a bunch of problem solving day after day … and just take it day by day,” Tracey said.