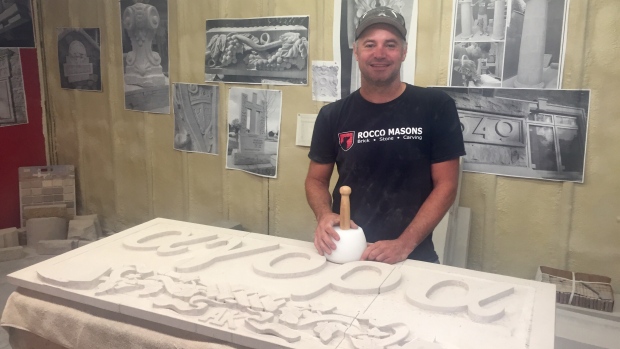 A bricklayer who has hand-carved stone details for many important buildings across North America is helping restore a building more than a hundred years old in downtown Saskatoon.

Ryan Watson of Saskatoon is carving an Indiana limestone sign to be placed on the front of the taverna restaurant, which is on the first floor of a building built in Saskatoon in 1907.

“I probably spent 120 hours carving it,” said Watson, referring to the almost finished sign. “The carving aspect is time consuming, but the finished product is usually very special.”

The sign reads “Agora” as it is written in the traditional Greek alphabet. The word refers to an Athens marketplace that Watson says runs parallel to the history of the Saskatoon building.

In 1907 the building on 21st Street was a department store with a seamstress above it. It was a central part of downtown the city. The tavern opened in the building in 1969.

Watson has done carvings for the Chicago Board of Trade Building, the King George in Saskatoon, and the University of Regina coat of arms.

“A hundred years from now, people may not know I did it, but they can walk down the street and appreciate the architectural aspect and the amount of work and thought that has gone into it,” said Watson.

The restored sign for the Taverna restaurant is due to be put up on Tuesday.