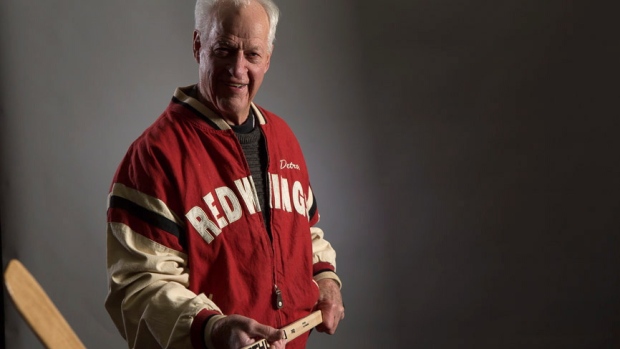 SASKATOON – Wayne Gretzky believes there’s no photo fans ask him to sign it as a smiling teenager next to idol Gordie Howe playfully hanging a hockey stick around the future great’s neck.

“Every time I look at the picture or sign the picture, it’s just great memories,” Gretzky said on Friday as he and several hockey legends paid tribute to Howe in his hometown. “He was nicer and better … when I met him than I thought he would be.”

The iconic photo was taken in Gretzky’s hometown of Brantford, Ontario, in 1972. Gretzky remembers it as if it were yesterday.

“We stood there, Gordon grabbed his cane and actually put it around my neck,” recalled Gretzky. “It became one of the most popular pictures I’ve ever signed.”

Gretzky, Bobby Hull, Brett Hull and Howe’s sons Mark and Marty shared their memories of Howe on Friday morning at a press conference ahead of an evening celebrity dinner in honor of Mr. Hockey.

Gretzky said Howe paved the way for him and others to be successful in the sport. He said that sometimes idols don’t live up to their reputation, but Howe didn’t.

“You will always remember him as a great player, a wonderful person and a great family man,” said Gretzky of the ailing Howe who recently suffered a stroke.

Howe, 86, smiled on Friday as he headed for dinner in his honor. In a suit and tie, he shuffled through a hotel lobby and paused briefly with a fan that shook his hand and captured the moment with a selfie.

Howe’s 801 career goals rank second in the NHL after Gretzky’s 894. The Hall of Famer also holds NHL records for most games played (1,767) and seasons (26), and has won the Stanley Cup four times with the Detroit Red Wings.

Brett Hull said when he played in Detroit he had many pre-games chats with Howe about hockey, sports, and life in the locker room, conversations he’ll appreciate.

He said it was hard to imagine playing as long as Howe did.

“To be productive at this age is a remarkable achievement and it’s hard to believe he can really do it,” said Hull.

“He hadn’t run in two months,” Marty Howe said, adding that his father has also gained 21 pounds since the experimental treatment.

“His back is bothering him a bit now, so he shuffles his feet, but I guarantee if he comes to this (dinner) he’ll go where he needs to go. His blood runs in hockey.”

Bobby Hull said he was thrilled to be part of the Howe tribute.

“I go back to when I was 10,” he said, adding that he stood in the sleet and rain to watch a game at Toronto’s Maple Leaf Gardens.

He was in awe to watch Howe play.

“My dad looked at me and said, ‘Robert, if you can shoot the puck like that, you can play in this league,” he said.

Hull said he played Howe eight years later and that it was a “miracle” to share the ice with him.

Howe’s sons both shared family values ​​that their father cares about.

Gretzky said Friday dinner was an opportunity to thank Howe for what he did for ice hockey.

“I don’t think there is any doubt that I wouldn’t be here today if it weren’t for Gordie and Bobby Hull hadn’t jumped to the WHA in 1972,” said Gretzky. “So they definitely paved a way for guys like Wayne Gretzky to become professional athletes.”