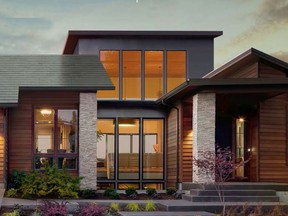 Arbutus wants to develop a solar power district, but the city layers report to another committee meeting

Phil Tank • Saskatoon StarPhoenix Arbutus Properties aims to build a solar powered sustainable community in southeast Saskatoon. The company would build all of the houses in the community with solar panels on the roof. The roofs would belong to the developer, not the homeowner, and would collect energy to power the entire community. Submitted photo Photo by Paul Buitenhuis /jpg

A Vancouver-based developer continues to show the seriousness of building a solar-powered community in Saskatoon despite frustration with City Hall.

Jeff Drexel, president of Arbutus Properties, appeared before a city council committee Tuesday to pledge that his company will pay for the changes to do justice to the unique Solair neighborhood.

Drexel said he had a meeting in Seattle on Monday and would find it difficult to change plans and return to Saskatoon to deal with the report.

“We are somehow in a compromised situation when it comes to addressing all the concerns that are raised (in the report),” Drexel told the committee on Tuesday.

Count. Ann Iwanchuk said she was concerned about the process that resulted in the report being sent to another meeting. The governance and priority committee, which includes all councilors and Mayor Charlie Clark, is due to consider the report on Monday.

The city council has spoken out against the Solair proposal as it is not on the City Hall’s schedule for the development of the Holmwood sector. The sector includes several current and some future neighborhoods on the eastern edge of the city.

Most of the land that Arbutus has targeted for Solair is outside of today’s Saskatoon city limits in the rural Corman Park community. Drexel said the Corman Park council had expressed support for Solair.

Drexel said Arbutus is willing to pay for changes to the Holmwood Sector Plan.

The 7,000-inhabitant community with more than 2,200 apartments, including houses, apartments and townhouses, is proposed for the southeastern edge of Saskatoon. The project, which would be entirely sun-powered, is listed on the company’s website despite its uncertain status.

Arbutus argues that its development deserves special treatment as it will serve as a model for sustainable communities. The plan is to price homes starting at $ 350,000, similar to comparable conventional homes.

“For this to be successful and sustainable, it must also be affordable,” said Drexel.

Arbutus announced in a press release Monday that the next phase of its Meadows community, which is being developed in the Rosewood neighborhood, will include rooftop solar-powered homes with photovoltaic panels.

The solar panels should produce 2,000 watts of electricity per house.

The Meadows is a 420 acre development near where Arbutus proposed Solair, which would cover approximately 300 acres.