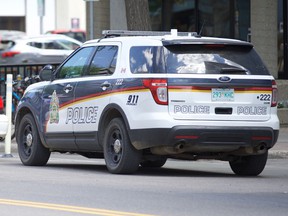 No one was injured after a woman allegedly drove drunk in a Mercedes through Saskatoon on Wednesday. According to the police, the black Mercedes was involved in a collision with another vehicle. A Prince Albert woman faces multiple charges.

A 35-year-old Prince Albert woman faces a range of charges after allegedly driving drunk in a Mercedes through Saskatoon on Wednesday, jumping on bar tabs, and losing her shoes and purse before crashing the vehicle.

Saskatoon Police say no one was injured in any of the incidents, attributed to a call from a facility on the 1800 block of Broadway Avenue before 4:30 p.m. at the “Hefty” bar-tab, but left her purse and ID , said the police in a press release.

The forgotten ID gave them a clue of who she was, the police said.

A little over an hour later, they got another call from a store, this time on the 3000 block of Diefenbaker Drive. Police received a report that a woman walked out of the bar without paying her cash bill, but this time left her shoes behind.

The woman was last seen driving a black Mercedes east on Diefenbaker Drive, police said in the statement.

Just before 5:40 p.m., the police received another report of a collision on 11th Street West and Circle Drive. The caller told police the Mercedes drove into a truck and headed east on 11th Street from the scene.

When police went to the area, a patrol unit found a black Mercedes that had crashed into a fence on 11th Street and W Avenue and a woman was standing next to it. The woman was not wearing any shoes, the police said.

She was taken into custody at the crime scene.