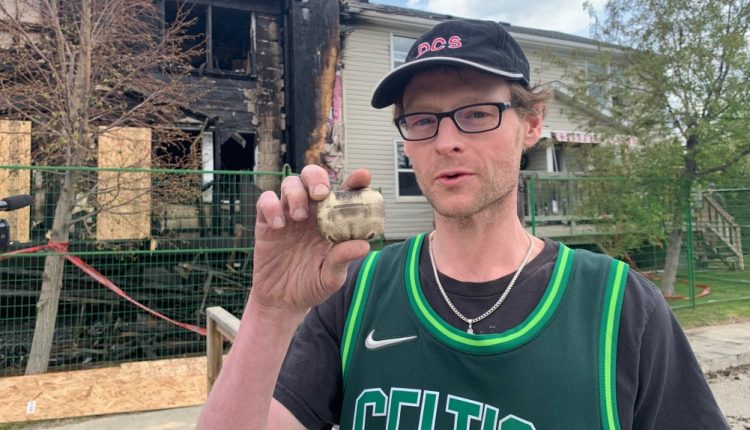 Just before 1:30, Saskatoon Fire Department (SFD) received multiple 911 calls reporting a fire at a four-unit building in the 200 block of Camponi Place.

Rodney Calett lives in the building; he said he and his family were almost asleep.

“We just woke up and they’re like ‘your house is on fire,'” Calett told CTV News.

Once Calett, his mother and three sisters were safely outside, he said he could see “huge flames coming up over the top of the roof.”

Upon arriving, firefighters began working to extinguish the fire while crews searched unaffected units to make sure there was no one inside, according to SFD.

By the time firefighters had arrived on scene, flames had engulfed the rear part of the building, SFD said in a news release.

After the blaze was brought under control, firefighters spent the morning monitoring for hotspots. The fire was declared extinguished at 8:48 am

There were no injuries reported.

The fire was contained to two units in the building.

It caused an estimated $700,000 in damage, according to the department.

The blaze is still under investigation.

Ryan wandler says he was woken up at 1 am when he smelled smoke. He opened the front door of his apartment and said he saw flames wanting to come in.

wandler says he lost everything in the fire.

‘It’s kind of hard to process right now … too many mixed emotions right now but the (valuables) are something you’ll never get back,’ he told CTV News.

wandler says he was able to walk through his unit with a fire inspector Tuesday morning and managed to find his AirPods which he says are his favorite and “couldn’t live without.”

Overall, Shifter says he’s glad no one was injured. He says he’s waiting for his insurance company to call and will be staying with his sister in the next few days.

“I’ve only been on one hour of sleep and yeah, it’s been hectic.”

–With files from Ryan Fletcher